This page has short descriptions and examples of the concepts that have been parsed into the HemOnc ontology. Note that this is NOT the full HemOnc chemotherapy regimen model, as there are still concepts that are in the process of being defined and parsed. Also note that only some of these concepts are available thru OHDSI; these are noted below. For an overview and information about how to obtain a copy of the ontology please go to this page. You can also follow this link to the Relationships page. 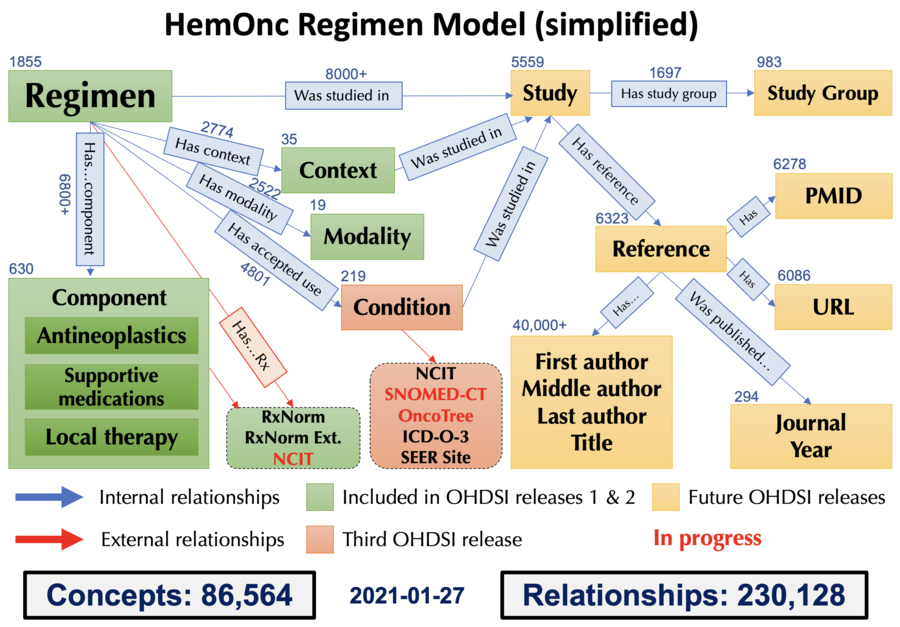 A condition is analogous to a diagnosis, and can be more or less granular. For example, Colon cancer and Rectal cancer are conditions, whereas Colorectal cancer is a condition that subsumes the other two. All conditions are hierarchically gathered into a top-level condition category.

Context refers to the disease setting in which a treatment is administered. There are currently 33 contexts described in the HemOnc vocabulary, organized into a hierarchical structure with is a relationships.

A protocol is the ordered combination of one or more Regimens. We are in the process of introducing this concept into the vocabulary - stay tuned!

The timing of regimen cycles is captured as separate and distinct from the individual drug SIG of each of the components of the regimen. These so-called "cycle sigs" are a property of the regimen, although there are some cases where different components of a regimen have different cycle sigs (e.g., chemoradiotherapy often has different timing parameters for the chemotherapy and the radiotherapy parts). In the OMOP version of the HemOnc vocabulary, these instructions are captured as character strings; we are also in the process of digesting them into component parts.

Modality refers to the intended effect of the agents being used in the regimen. Note that this can be distinct from the mechanism of action. The classic example is rituximab, which is a chemotherapeutic in the regimen R-CHOP and an immunosuppressive agent when used as monotherapy for immune thrombocytopenia. Other examples are steroids, which can be hormonotherapy, chemotherapy, or supportive medications depending on the intended use. We follow the SEER/NAACCR guidelines for modality, which means e.g., that a chemoradiotherapy regimen will have two modalities (chemotherapy and radiotherapy). In the future, we will develop a combined modality concept class.

A regimen is one or more components given concurrently with an intended disease-modifying effect.

A regimen stub is something that would ordinarily be a regimen, but is missing details such as what are the individual components. The most common reason for this is that the regimen is described on HemOnc.org as a comparator to another regimen but there are no further details. This situation most commonly arises when an experimental comparator arm is not superior to the control arm, thus not meeting the criteria for inclusion on HemOnc.org.

A regimen class is a collection of regimens based on a common theme. Regimen classes enable the aggregation of different but similar regimens, and are often referred to within FDA labels.

These are US and non-US brand names for drugs.

Components are the granular constituents of regimens. The majority of components in the HemOnc ontology are drugs or biologics, along with a small number of radiation therapy components. In general we use the plain form name of a drug, not the conjugated salt or ester (e.g., sunitinib, not sunitinib malate; doxorubicin, not doxorubicin hydrochloride).

Most drug components in HemOnc are members of one or more component classes. These classes are organized primarily by mechanism of action. There are also several classes which are not mechanistic but may be of interest, e.g., WHO Essential Cancer Medicines.

Surgical procedures generally performed with the intent of destruction or removal of cancerous tissue.

These are dispensing instructions specific to radiation oncology prescriptions. We are in the process of breaking down these character strings into constituent parts.

These are the routes by which medications may be administered or taken.

These are the dispensing instructions specific to drug prescriptions. In order to quality as a full SIG (as opposed to Sig Stub, see below), the instruction must contain the following: dose, dose unit, route, date. There are in addition several optional parameters, which will be shortly described in further detail. We are in the process of breaking down these character strings into constituent parts.

These are the dispensing instructions specific to drug prescriptions, that are lacking at least one of the four required categories to be designated a full SIG.

When available (sometimes for trials published 2005-2015, nearly ubiquitous thereafter) this is the unique clinical trial ID for the study. Most often it is an NCT identifier, but can also be ISRCTN, Japa-CITI, EudraCT, etc.

These are the designs used by the experimental arm(s) in a study. More information is available here.

This is the name of a prospective study conducted to evaluate one or more regimens on a population of human subjects. When possible, we try to use the abbreviated name provided by the authors and/or by ClinicalTrials.gov; these were somewhat uncommon prior to 2010 except for cooperative group studies. However, there are several examples where the same study name is used in different cancer types (e.g., BEACON) and we rename these to avoid name collisions. When no name is available, the default convention is to use the last name of the first author of the first publication describing the study, followed by et al., followed by year.

Right now, the only study class in HemOnc is the FDA registration study.

A formal consortium of individuals or institutions assembled for the purposes of running large multi-site studies.

The peer-reviewed journal in which a study is published, using the standard MEDLINE abbreviations.

Most of the references included in the HemOnc vocabulary are also indexed in MEDLINE. When this is the case, we also include a direct hyperlink to the PubMed abstract. Note: we plan to replace these URLs with PMID, soon.

Some references included in HemOnc are deposited in PubMed Central and thus freely available to any user. Note: we plan to replace these URLs with PMCID, soon.

This is the name for a published report on a study, using the following naming convention: Study::Sequence, where Sequence == 00 is the primary publication, Sequence == 01 is the first update, etc.

This it the title of the published report on a study.

This is the direct hyperlink to the publication described by the Reference concept.

Author names, in the format of Last-Name_First/Middle.

This is the generic absence of something.